The Parramatta Girls Training School was an institution sadly run like many others throughout the 1950s to the 1970s.

Parramatta Girls Home was the largest institution in New South Wales for girls.

Inmates were a mix of juvenile offenders, girls charged with exposure to moral danger and those deemed “uncontrollable” by the Children’s Magistrate.

Attempts to fight the system led to solitary confinement, or worse – the girls would be threatened with a trip on the overnight train to the dreaded Hay Institute (a maximum security prison for girls in the Riverina district that remained a guarded state secret until the early 2000’s). 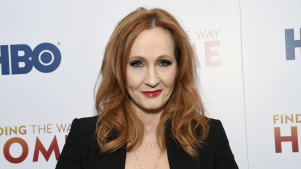 The Harry Potter author rejected the suggestion she was transphobic and said the clash of views left her “no option” but to return the prestigious human rights award.

“I am deeply saddened that RFKHR has felt compelled to adopt this stance,” she wrote.

“But no award or honour, no matter my admiration for the person for whom it was named, means so much to me that I would forfeit the right to follow the dictates of my own conscience.”

A Birthing on Country program on the New South Wales South Coast proves so successful the service is preparing to sign a statement of commitment with the Illawarra Shoalhaven Local Health District.

“It is about our self-determination, and it is about us taking that back.”

But this is how progressive misogyny works: you campaign vigorously for the rights of a tiny minority of people, ignoring the voices of the many women who say ‘hang on a minute’. You pat each other on the back for saying things like ‘trans rights are human rights’. I agree. So are women’s rights. The holier-than-thous discuss my gracelessness. It’s true I am not very ladylike but when rights collide we negotiate, surely?

Progressive misogyny, you see, doesn’t recognise women as a class at all; a class whose employment rights need protection. Not believing in a religion is not a hate crime, however much you chant the mantras at me.

You can say the word ‘-intersectionality’ as much as you like but, if you do, then defend Raquel Rosario Sánchez, the 29-year-old doing a PhD at Bristol on men paying for sex, who has been bullied for two years because she attends Woman’s Place meetings. Disciplinary hearings were closed down when balaclava-wearing trans activists appeared. Students yelled verbal attacks at ‘Terfs’, chanting: ‘SCUM! SCUM! SCUM!’

Gay men I know are rightly worried about the homophobia inherent in some trans activism. Wouldn’t you rather have a daughter than a gay son? Look at Turkey or Iran if you dare. We now have Stonewall supporting the right for trans women to bust the skulls of natal women playing rugby.

The Sexuality and Gender Identity Conversion Practices Bill means from early next year conversion practices used on protected persons will attract up to a 12-month jail term or a fine of $24,000.

It also provides for civil penalties, giving the ACT Civil and Administrative Tribunal the power to issue orders against people complained about, and order redress and compensation.

One amendment was made to the bill this morning before being passed, after concerns were raised by several groups including the Association of Christian Schools and the ACT Law Society, that the definition of sexuality or gender identity conversion practice was “too broad and vague” and could lead to criminalising parents and teachers.

The amendment put forward by the Government will now allow a person “the right to freedom of thought, conscience and religion, including the freedom to demonstrate their religion or belief in worship, observance, practice and teaching, either individually or as part of a community and whether in public or private,” under section 14 of the Human Rights Act 2004.

Evidence has shown that Aboriginal women are particularly reluctant to report family violence and sexual assaults in their relationships. The fear of the system combined with community stigma make it difficult to implement early community intervention. There is often a lack of communication, and when violence happens we don’t talk about it because of the shame we feel. . . .

High ethical standards, an understanding of our history, and sensitivity to our cultural protocols are profoundly important when working with Aboriginal women and gaining their trust; as is an awareness of their experience of repeated betrayals by white authorities.

To win the trust of Aboriginal women, services must acknowledge the wrongs of the past and show a commitment not to repeat them.

Tens of thousands of sexual assault survivors in Victoria have been stripped of their legal right to tell their stories using their real names.The changes to the Judicial Proceedings Reports Act – which were quietly introduced in February – silence all sexual assault victims whose offenders have been found guilty, by banning them from ever speaking out under their real identities.The new ‘gag laws’ have been described as a “major victory” for convicted paedophiles and rapists, as their victims are now “muzzled” and prohibited from self-identifying in publications – including media and autobiographies – regardless of their consent.

The laws also apply irrespective of when the crime occurred or when the offender was found guilty, meaning that many Victorian survivors who have lawfully been able to tell their stories in the past are now censored.

This includes scores of high profile survivor advocates – including several clergy abuse victims from Ballarat – some of whom have been speaking out for decades.

These individuals will now potentially face jail time if they continue their advocacy work under their real names.

Any sexual assault victim found guilty of breaking the new laws could face up to four months jail and fines in excess of $3000. Media outlets could also face potential prosecution and fines of over $8000.

It’s time to stop the practice of diagnosing humans with psychiatric labels and allow them to naturally experience distress, trauma and shock when they are abused and violated by another human being.

Borderline Personality Disorder has a pretty (shall we say… inclusive?) set of criteria, meaning that most of us who have ever experienced a period of distress would fill enough criteria for a diagnosis.

In fact, a piece of research by Middleton (2013) showed that people who have experienced a complex trauma such as sexual abuse, neglect, rapes or exploitation, on average, would have enough ‘symptoms’ to be diagnosed with between 10 and 12 disorders at any one time. You read that right.

“You are showing symptoms of BPD. That’s why you are feeling like this. Not the abuse. You have a personality disorder. Here are some pills that will mask the feelings.”

Why can’t we simply say:

“You have seen and experienced things that have changed your life. Those people hurt you and they have scared you. They have changed the way you react to certain environments and feelings. They have heightened your senses and your emotions. And you know what? That’s totally normal and totally understandable. You are entitled to respond like this. Is there anything I can do to help you to cope with these feelings and thoughts? What do you need right now? What helps and what hinders you?”

Source: I’m here to call out the psychiatric diagnosis of victims of sexual abuse and violence.

We wanted to show the pervasive anti-lesbian harassment, coercion and shaming of exclusively same-sex attracted females by people in the (L)GBT community so we collected these screenshots.

Nobody wants to be called transphobic, a vagina fetishist or a terf. These screenshots show hundreds of lesbians described with those words and worse, told to open their minds to sleeping with someone with male genitalia or to try ‘change their preferences’! Lesbian sexual orientation is treated as problematic and even harmful, which stigmatises lesbians. There is an incentive to try change sexual orientation so you no longer face this kind of harassment or anti-lesbian stigma.

Please read the full page and make up your own mind about this:

Source: Get The L Out – Lesbian Rights Aotearoa

The feminist scholar and activist Diana Russell, who has died aged 81, devoted her life to the campaign to end male violence towards women and girls. Perhaps her greatest achievement, and the one of which she was most proud, was popularising the term “femicide”, which she described as “the killing of females by males because they are female”.

She said: “From the burning of witches in the past, to the more recent widespread custom of female infanticide in many societies, to the killing of women for so-called honour, we realise that femicide has been going on a long time.”