So why do insurers pay, even after studies on experimental research demonstrate the outcomes are poor?

Currently, there are over 37,000 GoFundMe campaigns actively seeking resources for “top surgery.” I’ve tracked them for the last month, and 1,000 new appeals were added in just two weeks’ time. The vast majority of these are young women seeking double mastectomies to appear as transmen or non-binary (a few transwomen seeking breast augmentation are sprinkled in). At a minimum cost of $10,000 per surgery, that means in the past several years, tens of thousands of young women have collectively sought to raise $370 million dollars to amputate their healthy breasts. Many of the appeals seek costs for co-pays, travel, and other expenses because their surgeries are covered by insurance.

I wonder if these young girls are informed that up to 30 percent of women end up experiencing Post-Mastectomy Pain Syndrome, which can be chronic and debilitating, after what in any other circumstance is considered a “traumatic amputation.” From the GoFundMe group alone, perhaps 11,000 young women will get more than the ability to pose topless as transmen on Instagram, more than a temporary “gender euphoria.”

We are sacrificing young healthy bodies on the altar of the autonomous self. Is there a billable code for that? No matter who is paying, the price is too high.

This week, a full-page advertisement appeared in The New York Times. It was in the form of a letter addressed to the newly inaugurated President of the United States, Joe Biden.

“Dr President Biden,” it read. “You know this well: Mums are the bedrock of society. And we’re tired of working for free.”

The ad is part of a campaign called “The Marshall Plan for Mums” led by author, activist and founder of Girls Who Code, Reshma Saujani.

Together, they are calling for the US government to pay mothers for parental labour and to introduce a raft of family-friendly policies that could help rebuild the economy amid the COVID-19 pandemic.

“Motherhood isn’t a favour, and it’s not a luxury. It’s a job,” the letter read.

Source: Marshall Plan for Mums: the call for mothers to be paid.

The policy is likely to create more problems than it solves.

The World Athletic Championships in Doha, 29 September 2019. The 4×400 mixed relay final (2 men and 2 women per team) sees Poland, with a female runner, start the last leg with at least a five-second lead. Around 50 seconds later, FOUR men have cruised past her to leave Poland finishing 5th.

A fortnight before President Biden took office, Speaker Nancy Pelosi announced that “mother”, “father”, “daughter”, “brother” and other gendered words to describe familial relationships would be removed from House rules. Henceforth in official documents they would be replaced by the gender-neutral terms “parent”, “child” or “sibling”. The purpose of this was to “honour all gender identities”.

Then, within hours of his inauguration, the president’s first executive order decreed that his administration would fully apply the Supreme Court’s Bostock ruling that denying rights “‘because of … sex’ covers discrimination on the basis of gender identity” too.

But this order has far wider consequences. In a stroke of the pen, with zero debate or legislative scrutiny, biological sex as a discrete political and legal concept has gone. US women’s prisons, publicly funded domestic violence refuges and college sporting contests can no longer deny entry to any male-born person who identifies as a woman.

If sex and gender identity are the same, a male person does not just have the human right to live as a woman free from violence and discrimination, or be granted social and legal recognition as a woman. (Which most feminists wholeheartedly support.) What is now claimed is that such a male is biologically female. From this bizarre science-denial stem many absurdities: a penis is not necessarily a male organ, therefore a teenage male who identifies as a girl cannot be denied entry to female showers because, regardless of physical appearance, they are also “female”.

Source: War of words risks wiping women from our language | Comment | The Times

Venture capitalist Elaine Stead sued the AFR and Joe Aston over a series of published columns where she was described as a “feminist cretin”. Four women have taken out this year’s awards, with 26-year-old sexual assault survivor and advocate Grace Tame named Australian of the Year.

Source: An Aboriginal activist and an advocate for migrant women are among the 2021 Australians of the Year

Almost all female young offenders are likely to have been abused by a family member or someone they trust, research has found.

President Joe Biden‘s executive order to strengthen anti-discrimination protections for the LGBTQ community has sparked concerns about what impact it might have on female sports.

[J]ournalist and author Abigail Shrier warned of the move by Biden on his first day in office and referred to speculation that public schools will have funding pulled if they do not allow transgender female athletes to compete in girls’ sports. 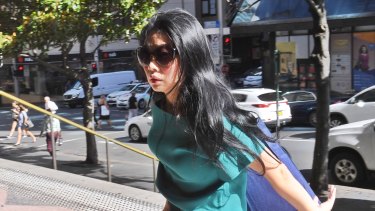 The appeal judge criticised “tone deaf and inappropriate” comments about Denise Lee by the sentencing magistrate, along with media reporting of the case.