The free exchange of information and ideas, the lifeblood of a liberal society, is daily becoming more constricted. While we have come to expect this on the radical right, censoriousness is also spreading more widely in our culture: an intolerance of opposing views, a vogue for public shaming and ostracism, and the tendency to dissolve complex policy issues in a blinding moral certainty. We uphold the value of robust and even caustic counter-speech from all quarters.

We need to preserve the possibility of good-faith disagreement without dire professional consequences. If we won’t defend the very thing on which our work depends, we shouldn’t expect the public or the state to defend it for us.

Source: A Letter on Justice and Open Debate | Harper’s Magazine 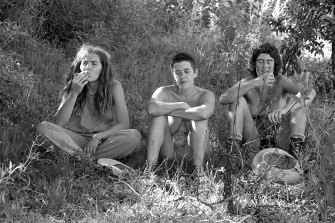 In 1978 and 1980, the artist and filmmaker shot a series of never-seen-before photographs at Amazon Acres, a radical women-only community that unfolded on a remote Northern New South Wales mountain in the seventies and eighties.

Source: Windows into an alternative world

London — Nearly three times as many women were killed by men during three weeks of coronavirus lockdown in Britain than the average for the same period over the last decade, according to data compiled by monitoring and advocacy groups. In the three weeks starting March 23, when people were asked to stay in their homes to stop the spread of COVID-19, 14 women were killed by men in the U.K., according to Karen Ingala Smith, who runs Counting Dead Women and is chief executive of Nia, a nonprofit dedicated to ending sexual violence and domestic abuse. That’s the highest number recorded in over ten years.ise in domestic abuse against women globally due to quarantine measures.

As a society, we have to ask whether our resources should be used to assist the healing of victims rather than criminal court processes.

[T]here are hundreds of prisoners in Australia convicted on the uncorroborated evidence of complainants, where there was an open possibility of innocence that was rejected by the jury.

The only reason they are languishing there, and Pell is no longer, is because they do not have the funds nor fame to appeal to the high court in the manner Pell did. And in those rare cases where they are able to attempt it, they are extremely unlikely to be granted special leave to appeal.

It is entirely appropriate that an accused can be convicted on the uncorroborated evidence of a complainant. After all, most sexual offences are committed in circumstances where it is only the complainant and the accused present. Where there is other potentially credible evidence to challenge that account, the jury must apply the high standard of proof to reach their verdict.

Pell will still likely face his accuser in a civil lawsuit. It may be that victims of historical child sexual abuse will prefer to seek their justice in the civil courts alone or at first instance, where the standard of proof is on the balance of probabilities, rather than beyond reasonable doubt.

Source: Hundreds of potentially innocent people are languishing in prison. They won’t get the chance George Pell did | Peter O’Brien | Opinion | The Guardian

Journalist Jess Hill has won the 2020 Stella Prize for her non-fiction book ‘Look What You Made Me Do’, a profound & searing examination of domestic abuse.

Source: Journalist Jess Hill wins 2020 Stella Prize for See What You Made Me Do

. The government’s recently-published list of key workers, for instance, includes a number of predominantly female occupational groups, like nurses, care workers and supermarket staff, who will all be at heightened risk because of the personal contact their jobs involve (these are also, and will doubtless remain, among the lowest-paid jobs on the key worker list). The absence of women from pandemic ‘war cabinets’ isn’t just a symbolic issue, it’s a ‘nothing about us without us’ issue.

The idea of ‘home’ as a safe haven, a shelter from the dangers of the outside world, may be less than soothing when you’re the one who will be expected to do even more caring than usual, in conditions of household isolation (i.e., without a break, or any of the usual social supports), and possibly with drastically reduced economic resources.

There’s also the point that for some women ‘home’ is a place of danger rather than safety. Reported incidents of domestic violence increase significantly even during relatively brief holiday periods; it’s horrifying to think about what could happen during a lockdown lasting weeks or months.

After two trials described by Amnesty International as “grossly unfair,” Iranian human rights lawyer Nasrin Sotoudeh has been sentenced to a total of 38 years in prison and 148 lashes.

Sotoudeh, who has dedicated her life to defending Iranian women prosecuted for removing their hijabs in public, has been in the crosshairs of Iran’s theocratic government for years.

Sunday 8 March is International Women’s Day. This is a day when we celebrate women’s achievements, while calling out inequality. But with the murders of Hannah Clarke and her children still fresh in our minds, it’s hard to feel there is much to celebrate.

Jaime Evans, Director of the Women’s March,  joined The Daily to tell us about the March planned for International Women’s Day.

Remember when forums about women’s rights were held publicly, in the open and considered a legitimate political movement? Wondering why that changed? Come to hear and talk about it in Sydney with a panel featuring feminist speakers from Australia and New Zealand.Seeking Feminist Future: A conversation on feminism exploring gender critical ideas.