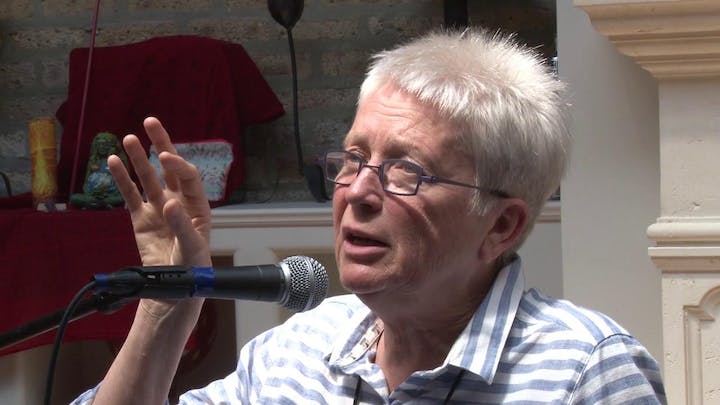 The Stella Prize, a major literary award celebrating women’s fiction and non-fiction writing in Australia has announced its longlist for 2019.

Source: The 12 women and their books nominated for the $50,000 Stella Prize

It’s the lowest number of women represented since the G20 started holding summits in 2008.

Information about the Week of Action against the G20 and the IMF
This year, the Argentinian government is hosting the G20, a one year process during which more than 80 meetings of G20-working groups, ministerial meetings and summits of the focus groups are taking place in our country. The Leaders’ summit, for which the presidents from the G20 countries will travel to Buenos Aires, will take place on Friday 30th of November and Saturday 1st of December 2018 at the Centre of Conventions “Costa Salguero”. The government of Mauricio Macri is already preparing for the mega event, buying airplanes, arms and what they call “anti-riot equipment” . In fact, one third of the budget for organizing the G20 is dedicated to “safety and defense”, which roughly amounts to 50 million U$S. And while the government is spending millions on the G20, it is cutting expenses for education and health andhas entered a dangerous spiral of indebtedness by asking the IMF for a loan of 50 billion U$S in order to assure the country’s liquidities and its capacity to pay speculative hedge funds.
This is why the Confluencia Fuera G20 – IMF (the “Confluence G20 – IMF Out)” is planning a massive Week of Action, from the 25th of November to the 1st of December and is inviting everyone to participate in the global repudiation of the G20, the IMF and everything these institutions represent.
https://noalg20.org/info-in-english/

A web developer and long-time activist, Sinreich grew suspicious when she noticed the page was posting what she recently called “weird, partisan memes that seemed totally out of character.” Then she saw that the event page was promoting the wrong date for the 2019 march.
While the vast majority of the pages and events had no followers or attendees, some of the fake events promoting the wrong march date became popular. Fake events for Philadelphia and Chicago received more than 10,000 RSVPs; the event posted for Seattle picked up more than 20,000. (As ever with numbers on social media sites, it is possible that at least some of the RSVPs came from fake accounts used to make a page seem more popular).
A Women’s March spokesperson told CNN that “many of these fake pages are used to sell merchandise, with the proceeds benefiting individuals instead of our movement. The efforts to capitalize on movement work isn’t new, but it is frustrating, particularly as we make an effort to only sell ethically sourced and produced merchandise — a rule these imposter pages don’t abide by.”
https://edition.cnn.com/2018/10/17/tech/womens-march-facebook-scam-bangladesh/index.html

Sam Wolfson for the Guardian reports:
A coven of witches will gather in an occult bookstore in Brooklyn, New York, on Saturday to place a hex on the supreme court justice Brett Kavanaugh. Tickets to the event, which cost $10, with half the proceeds going to women’s and LGBT charities, have already sold out.
The ceremony has become a talking point for some rightwing commentators, who see it as part of a pattern of leftwing attacks on leading Trump allies. On Fox News last Friday, Tucker Carlson discussed the coven’s plans, taking particular umbrage with their idea to donate 25% of proceeds to Planned Parenthood, which he said would “help them continue to fund their human sacrifice rituals”.
https://www.theguardian.com/us-news/2018/oct/15/witches-public-hexing-brett-kavanaugh
Ritual to Hex Brett Kavanaugh Eventbrite Invitation
Please join us for a publich hex on Brett Kavanaugh and upon all rapists and the patriarchy which emboldens, rewards and protects them. We will be embracing witchcraft’s true roots as the magik of the poor, the downtrodden and disenfranchised and it’s history as often the only weapon, the only means of exacting justice available to those of us who have been wronged by men just like him.
He will be the focal point, but by no means the only target, so bring your rage and and all of the axes you’ve got to grind. There will also be a second ritual afterward – “The Rites of the Scorned One” which seeks to validate, affirm, uphold and support those of us who have been wronged and who refuse to be silent any longer.
https://www.eventbrite.com/e/ritual-to-hex-brett-kavanaugh-tickets-51031211728

What we are witnessing right now through the response to Kavanaugh — and the slow-roll comeback of various men held to account by #MeToo — is a large-scale dismissal of women’s reality. It’s a national gaslighting by politicians and pundits saying Yes, I’m sure something happened to Dr. Blasey Ford, but the poor thing must be mistaken. It’s a mass trauma perpetrated by leaders who would tell women in their most painful of moments that it’s men who are the real victims.
https://medium.com/s/jessica-valenti/the-gaslighting-of-american-women-456821bbb09d
The truth, though, is not that most men abuse women — it’s that the small number who do are able to get away with it multiple times. For example, according to a 2002 study, six percent of men attempt or commit rape, but more than half of them will attack more than once, averaging about six rapes each.
Why is this minority of bad men able to get away with abusing women over and over? Because “good” men make it easier for them.
Knee-jerk sympathy for men accused of wrongdoing — something feminist philosopher Kate Manne dubs “himpathy” — isn’t new.
As feminist writer Thomas Millar put it nearly a decade ago, “It takes one rapist to commit a rape, but it takes a village to create an environment where it happens over and over.”
https://medium.com/s/jessica-valenti/how-very-bad-men-get-away-with-rape-317e1db7a919

Eleanor Ainge Roy in The Guardian reports:
The prime minister of New Zealand has been met with thunderous applause at the UN for her speech espousing global cooperation and kindness from world leaders, in stark contrast to Donald Trump’s portentous rejection of globalism earlier in the week.
Jacinda Ardern’s national statement was viewed by many commentators as a direct rebuttal to the US president’s call for increased isolationism and national self-interest.
Ardern called for equality for women, action on climate change and a recommitment to multilateralism, saying : “We must rediscover our shared belief in the value, rather than the harm, of connectedness.”
Ardern concluded her address by committing to work towards the equality of women and girls not only in New Zealand, but around the world, a goal that earned her thunderous applause from world leaders, the first spontaneous applause all day, according to a Radio New Zealand reporter on the ground.
“Me Too must become We Too,” Ardern said. “We are all in this together”
https://www.theguardian.com/politics/2018/sep/28/we-are-not-isolated-jacinda-arderns-maiden-speech-to-the-un-rebuts-trump?