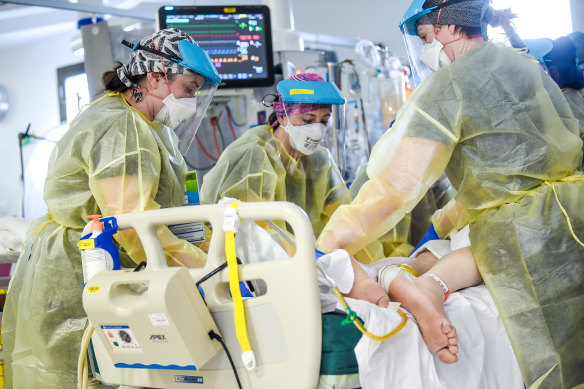 Australian women in ICU for male-dominated conditions are at greater risk of dying compared with men, but the pattern “cuts both ways”, a study has found.

“The big question we set out to answer was, ‘Does sex or gender matter when you’re critically ill?’ And what we found is that sex absolutely matters,” Austin Health intensivist and lead researcher Dr Lucy Modra said.

“It has an impact on whether you live or die and your illness severity.”

“We’ve known for some time that women have worse outcomes than men from some typically male conditions, but what we essentially found is that this is a pattern that cuts both ways,” Modra said.

What perplexed researchers most, however, was the “minority effect”, with evidence that the gender balance of patients in an ICU could be linked to survival rates.

“What we found was that women admitted to ICUs with relatively few female patients were more likely to die than men, and vice versa. This was a big surprise – I did not expect to find that at all,” Modra said. 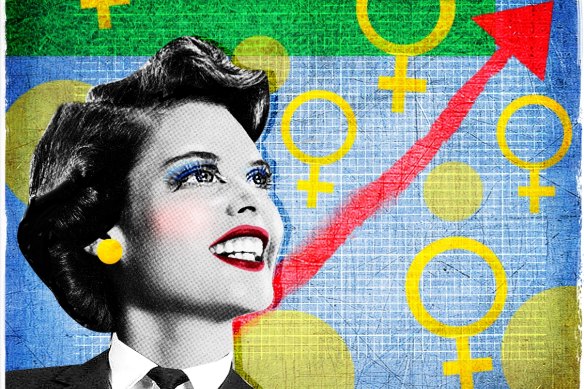 Across OECD countries, there is an undeniable trend of “male decline” that is much commented upon, heavily researched and, increasingly, co-opted by reactionary forces who want to blame feminism for the difficulties of contemporary boys and men.

This decline is most remarkable in education trends. This week in NSW, the HSC school-leaving results were published, and they showed girls now outperform boys in most subjects. Girls are also gaining on boys in the traditionally male strongholds of mathematics and physics.

According to The Sydney Morning Herald report, this gender gap persists into university, with a 2022 University Admissions Centre study finding that boys enrol in university at lower rates than girls, they’re less likely to pass all their subjects, and more likely to fail everything.

The UAC study found that being male was “greater than any of the other recognised disadvantages we looked at”. That’s an extraordinary finding, and it’s not confined to Australia. In American colleges, there are roughly six female enrolments for every four male ones. “This is the largest female-male gender gap in the history of higher education, and it’s getting wider,” the Atlantic reported in 2021.

Male decline is eagerly pounced upon by “men’s rights activists” and anti-feminists who use it as proof that feminism has “gone too far” and that affirmative action and the woke agenda are displacing men.

Source: Education and gender: ‘Male decline’ is real, and it’s a problem for women too

The City of Melbourne has committed to build three statues of prominent women in a bid to address the massive gender imbalance in public art.

Currently, just 9 of 580 statues in Melbourne depict real women, an issue that’s seen lobby group A Monument of One’s Own (AMOO) — co-convened by Clare Wright and Kristine Ziwica — placing pressure on governments to address the imbalance.

Independent MP for Goldstein Zoe Daniel said she would strongly put the case forward for Vida Goldstein, who was a leading suffragist and the first Australian woman to nominate for election in the federal parliament. Goldstein ran for election several times as an independent, and was also the first Australian to meet an American President at the Oval Office, when she was Australia and New Zealand’s sole delegate to the International Women’s Suffrage Conference.

Source: Melbourne to get three new statues of prominent women

A 22-year-old Black woman in Missouri who escaped after a white man abducted, tortured and held her captive for weeks in a basement has said several other Black women were killed by her captor – less than a month after police dismissed community concerns about a serial killer as “completely unfounded”.

The woman, who has not been named, escaped on 7 October after about a month in captivity, still wearing a metal collar locked with a padlock that authorities had to remove.

She told Kansas City police that 39-year-old Timothy M Haslett had imprisoned her in a basement room in Excelsior Springs – a city just north-east of Kansas City – where he whipped and raped her repeatedly. She escaped while Haslett was dropping his child off at school, and she sought help from neighbours whom she told that her friends “did not make it out” and were killed by Haslett.

Around the time she went missing, several prominent community leaders raised concerns about the disappearance of multiple Black women and girls. Last month, the Kansas City Defender, a nonprofit newsroom, published a video of Bishop Tony Caldwell saying that he had received information that the missing women had all been kidnapped from Prospect Avenue in Kansas City.

The police dismissed the concerns outright as “completely unfounded”, saying in a statement that “there is no basis to support this rumor”.

Haslett, a scruffy looking white man with dark brown hair and a greying beard, was detained and last week pleaded not guilty to charges including rape, kidnap and assault.

The case is just the latest example of a predominantly white police force refusing to take seriously reports of missing and murdered Black, Brown and Indigenous victims – especially women and girls.

In Australia, there is currently no legal course of action available to employees if an employer refuses their request for flexible work.

The lack of legal protection has become particularly apparent since the pandemic transformed our attitudes towards working from home and working flexibly. Since 2020, many employees have continued to work from home or opt for a hybrid approach, with some days spent in the office and some days working from home.

In 2009, the Fair Work Act 2009 (Cth) established a right under section 65 to request flexible work arrangements. However, this is merely a right to make a request, not a right to challenge the result. To be eligible to make a request under the act the employee must have completed 12 months of continuous service with the employer.

During a girls’ tournament last month, a Highlands High volleyball player pelted a Hiwassee Dam High player in the forehead with the ball during a return.

The Hiwassee Dam player, a biological girl, suffered severe head and neck injuries, resulting in long-term concussion symptoms, including vision problems. The girl has still not yet been cleared to play again by her primary care physician or a neurologist.

With a 5-1 vote, the Cherokee County Board of Education declared the event a “safety issue” and canceled all remaining games against Highlands High.

The perspective of a longtime coach swayed Cherokee Board Member Joe Wood:

“I’ll never put a child in a position to be seriously injured,” Wood said.

“I think the odds (of injury) in these non-contact sports aren’t high. But in particular, in this meeting, a coach of 40 years said they’d never seen a hit like this. That was really what sealed the decision, at least on my part.”

Biological boys playing against girls on the volleyball team is dangerous and unfair, as these Cherokee Board Members correctly pointed out. This fact is supported by studies (and common sense).

The Journal of Strength and Conditioning Research also confirmed male dominance in the sport. The jump height and explosive power of males are significantly higher than those of females, according to scientists.

The federal government will boost paid parental leave for families by an additional six weeks, taking it to a total of six months.

Opening arguments began on Thursday in the US Court of Appeals for the 2nd Circuit case of Soule v. Connecticut Association of Schools. This after the case was dismissed by a federal judge in 2021, but attorneys for the Alliance Defending Freedom, representing the young women, are determined to pursue fairness and seek justice for the student athletes under Title IX.

It’s clear which side of the divide the Biden administration is on, which is that gender identity should supercede considerations for biological sex in law, culture, and society. “The Biden administration has its head in the sand and is not paying attention to the real world impact of gender identity policies and how devastating they are for female athletes,” ADF Senior Counsel Christiana Kiefer told The Post Millennial.

The two biological males who were permitted to compete against women, Andraya Yearwood and Terry Miller, began their pursuit of women’s titles and records in 2017-18. Yearwood and Miller were applauded for their bravery while female high school athletes were relegated to the sidelines.

In that case, Judge Robert N. Chatigny demanded that the Alliance Defending Freedom attorney who were representing the women refer to the two biological males as “transgender females,” stating that “referring to these ­individuals as ‘transgender ­females’ is consistent with science, common practice and perhaps human decency.”

“If a judge dictates what words parties have to use,” ADF attorneys said at the time “it can bias the case. It is essential that every litigant be able to present their case to an impartial court in the way that they believe is the most accurate and true to the facts. We’ve explained in our brief how the judge’s order prevents us from doing that for our clients.”

Banks with more women in their boardrooms lend less to big polluting companies, according to new research by the European Central Bank.

“Female corporate directors and women in general are more likely to care about long-term societal issues, including climate change.”

The study is a world first, regarding the influences of gender on boardroom banks’ capability to “green” the economy, leading to evidence that a greater female representation in the boardroom contributes to advancing the fight against climate change.

The study also found that the “green” effect of female board members is stronger in countries with more female climate-oriented politicians.

Exploring the potential influence of women in the boardroom on banks’ lending strategies is a critical step towards fighting climate change. The study noted several other previous studies which found that women were more community-minded, altruistic and caring than men.

Female directors have a stronger orientation toward corporate social responsibility (CSR), compared to male directors who tend to be more focused on economic performance.

Steve Price has doubled down on comments made in an opinion piece in which he described the AFLW as “substandard” and “not elite sport”.

Price’s sole MO in raising this issue was not to provide constructive feedback to the AFLW, but to tear down a league which is working fearlessly to grow. The AFLW has already shifted the status quo in sport and enabled young female athletes a new outlook on their lives and careers.

In just five years, the AFLW has hit some momentous milestones including record crowds and sellouts. Only two months ago, the season’s first round clash between traditional rivals Essendon and Hawthorn had to be moved to Marvel Stadium after tickets for a smaller venue sold out within a day.

In just five years the AFLW has spurred a huge increase in the number of women and girls playing the game. 7.3 million Australians now express interest in the women’s competition and there are 2,540 girls’ and women’s community football teams scattered around the nation.

In just five years, the AFLW has risen to become the single biggest employer of professional sports for women in Australia with 420 players. A pay rise of an average of 94 percent across all four payment tiers was secured this year, enabling some players to focus solely on football and not supplementary careers.

Source: Steve Price and the men who feel threatened by a status quo shift in sport