Dr Beatrice Faust (known as Bea), feminist, political campaigner, journalist, author and academic, died on October 30 at the age of 80, after becoming ill at her home in Churchill, Gippsland.

Bea was one of the first women to campaign for civil liberties, abortion law reform and sex education. In 1966 she co-founded the Victorian Council for Civil Liberties, mainly to campaign against censorship laws. She was best known for being the founder of the Women’s Electoral Lobby (WEL) in 1972. 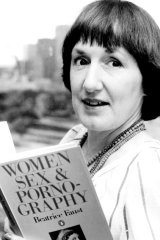