Toronto is officially getting another sex doll brothel, meaning people will have a new option to bed some life-sized ladies made completely of silicone in just a couple of weeks.
It marks the second to open in Toronto, which, whether you agree with the concept or not, is a big moment for both the sex work and technology industries (the silicone tech sector, anyway—these aren’t robots).
Though the idea of sex dolls certainly isn’t a new concept, and the threats of the “uncanny valley” has been explored in films and pop culture for years, having another full on sex doll brothel in the city feels like we’ve definitely arrived in a new age of sex and tech.
Similar establishments have already opened in Europe (the world’s first opened in Germany in 2017), and not without their fair share of controversy and debate.
https://www.blogto.com/city/2018/08/aura-sex-dolls-toronto-brothel/ 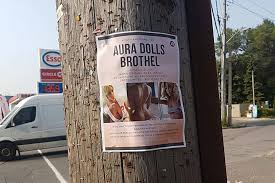