The decades-old US law barring Americans who commit domestic-violence from possessing guns contradicts the nation’s “historical tradition” of access to firearms even for people who aren’t “model citizens,” a federal appeals court ruled.

California Attorney General Rob Bonta called the decision “dangerous”, noting that “firearms are used to commit more than half of all intimate partner homicides in the United States”.

Shannon Watts, founder of Moms Demand Action, said in a statement that the 5th Circuit decision should be overturned.

“This extreme and dangerous ruling is a death sentence for women and families as domestic violence is far too often a precursor to gun violence”, Shannon said. “When someone is able to secure a restraining order, we must do everything possible to keep them and their families safe – not empower the abuser with easy access to firearms.”

A transgender killer now identifies as an infant and demands nappies, a dummy, and baby food in prison, it is reported. Sophie Eastwood, 36, formerly known as Daniel Eastwood, was sentenced to life in prison in 2004 after using shoelaces to strangle her(sic) cellmate.

Eastwood, who has lived as a woman in Polmont prison in Brightons, Scotland, for four years, is now demanding prison staff treat her like a baby.

Sources told the Daily Record she has told the prison governor she wants to wear a nappy, have her food pureed like a baby, and has even been supplied with a dummy.

Prison bosses are said to be taking the demands seriously.

The killer even demands officers hold her hand when she is escorted from her cell, according to reports.

A source told the Daily Record Eastwood is “difficult” and “manipulative”.

The source said: “This prisoner has been difficult and manipulative over the years, which is why she is still behind bars after 17 years. 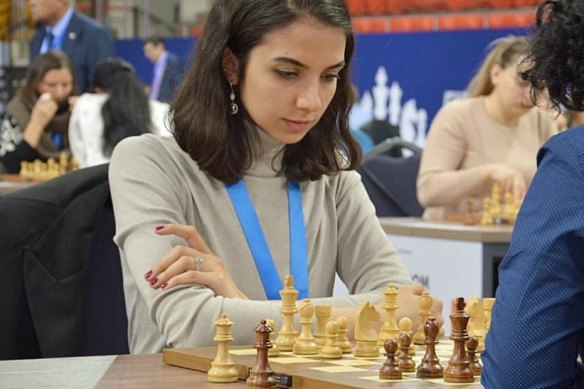 Iran has been swept by demonstrations against the country’s clerical leadership since mid-September, when 22-year-old Iranian Kurdish woman Mahsa Amini died in the custody of morality police who detained her for “inappropriate attire”.

Laws enforcing mandatory hijab wearing have become a flashpoint during the unrest, with a string of sportswomen competing overseas appearing without their headscarves in public.

Source: Iranian chess player Sara Khadem ‘warned not to return to Iran’ after competing without hijab

OAKLAND — An Alameda County jury convicted a San Jose transgender activist of murdering three family members inside their Oakland home after less than a full day of deliberations.

Dana Rivers, 67, of San Jose, murdered Charlotte Reed, 56, her wife Patricia Wright, 57, and Wright’s 19-year-old son, Benny Toto Diambu-Wright, on Oct. 11, 2016, the jury found. Now, the case has moved on to the sanity phase — set to start Dec. 5 — where the same jury will rule whether Rivers was legally insane at the time of the murders. If so, state law dictates she’s(sic) sent to a mental hospital until she’s(sic) cured and/or for as long as she’d(sic) serve in prison for a triple murder conviction.

The evidence against Rivers was hard to refute; when police arrived at the victims’ home on Dunbar Avenue in Oakland, Rivers was standing outside, drenched in the victims’ blood, having just gotten onto a motorcycle containing one of at least three murder weapons. Prosecutors alleged she(sic) shot and stabbed Reed and Wright, then shot Diambu-Wright when he came to investigate what was happening. Diambu-Wright staggered outside the home and collapsed, dead, in the middle of the street.

Before her arrest, Rivers was best known as a schoolteacher who became an international news story when she(sic) came out as transgender to her students in a high school in Antelope, Calif. She(sic) was subsequently fired for sharing details of her transition, then sued the district and received $150,000 in a settlement. In the aftermath, she(sic) became an activist for transgender rights, and ultimately moved to the Bay Area to restart her(sic) life as an educator.

The women’s estate represents just 4-5% of the entire prison population in the UK at any time and women are imprisoned overwhelmingly for non-violent offences.

Women are not drawn to crime – we represent just under 15% of all arrests. We tend to like order, stability and safety, so when crimes ARE committed and we’re sent down it’s inevitable that the significant factors leading to those crimes will involve untreated mental illness, health issues, substance misuse and financial difficulties.

We know that 95% of violent crime is committed by men, so what of that 5% of female violent offenders? In my experience of serving some of my sentence on a lifer’s wing I met women serving life sentences for murder. I can’t speak for every murderer in the prison system of course but every last one of those women – who again, I counted as my friends – were there because they’d killed their male abusers, after months and years of rape, torment and violence. Every. Last. One.

They had no proclivity to kill, nor did they enjoy it. It was purely for survival. I’m telling you this to highlight again that MEN AND WOMEN ARE DIFFERENT.

Contrast this with male patterns of offending. One of the MOST common reasons men are incarcerated is violent crime, 40% of which are offences against women. Men rape, maim and kill for sport. They enjoy doing it. Tied up in this already atrocious statistic is that a full 18% of men in prison in the UK are there for serious sex offences.

Of this 18% of rapists and paedophiles, guess what? Half of them say they’re women, and they’re routinely moved to the women’s estate, penis and all.

So WHY should a woman serving a short sentence for failure to pay parking tickets have to accept intimidation and terror as part of her already disproportionate punishment? WHY should an 18 year old girl on remand for shoplifting expect the potential for rape and assault by a man in a wig during her stint? WHY do these questions even need to be asked, and WHY after multiple instances of exactly this happening is this policy still being enacted? Is it simply a fear of being called transphobic? You would have thought after Karen White that ship might have sailed, but apparently that’s still a worse prospect than deliberately endangering women and girls.

We have sex segregated prisons because MEN AND WOMEN ARE DIFFERENT and women have a right to be kept safe from men. The ease with which men claiming transgender status has steamrollered basic safeguarding principles should alarm all of us. Violence in the male estate is not women’s problem to solve.

Women cannot rape. We rarely kill. We do not commit violent crime at the prolific, industrial scale that men do, and we are having our reputations dragged through the mire by the men who would wear our skin. These are not our crimes, and our prisons are no place for these revolting, duplicitous men. We will not stop shouting about this until every last one of these deviants is identified and returned back to the male estate WHERE THEY BELONG.

Source: The speech and the reason for the speech

Of all species in the world, humans and chimpanzees are among the few to coordinate attacks on their own kind.

[A] collaboration of South Korean and American scientists shows, in a new paper published in PLOS Genetics Thursday, that war is in our genes – humans and chimps. Not in other apes. Apparently it’s no coincidence that the chimp is our closest relative: we share about 99 percent of our DNA.

Macaques, for example, and some bonobos – a subspecies of chimp deeply devoted to peaceful sex – lack these genetic variants.

The change in humans and chimps is in a gene, called ADRA2C, which regulates the fight-or-flight response.

Technically, ADRA2C dulls the response but chimps and humans produce a molecule called NRSF that inhibits ADRA2C. So, all in all, the fight-or-flight response is increased.

In what is said to be the first case of its kind, a man in Scotland appeared in court to have public order complaints he committed under two different gender identities and names heard on the same day.

During a hearing over the March flashing incident which took place earlier this year, Morgan’s solicitor had argued that the exposure was “not a sexual act” but “a demonstration” during an “argument over gender.”

In most news reports on Morgan’s crimes, he was referred to by both masculine and feminine pronouns, alternating depending on whether the offenses being described were committed under his male or female personas.

“In the article this person is referred to as ‘he’ and ‘she’ if this doesn’t highlight the absolute batshit-craziness of this, I dunno what does,” Nellie Munro wrote in response to the Scottish Sun‘s article.

Other users took issue with the court’s sentencing, finding it too lenient for the laundry list of offenses Morgan had committed.

Source: UK: Serial Offender Appears In Court as Both Man AND Woman on Same Day – Reduxx

Prisoner ‘identifies as woman’ but still has penis

Female prison guards at Tires women’s prison found themselves in an impossible position: they were expected to body-search a new inmate who, in spite of having male sex organs, identifies as a woman.

The issue saw the prisoner ‘kept waiting for around an hour in the corridors of the jail until two female guards were persuaded to carry out the body-search “under protest”, writes Jornal de Notícias.

This particular prisoner, named as Tânia Ferrinho, is suspected of the attempted murder of her septuagenarian parents who sustained multiple stab wounds in a reportedly frenzied attack that saw them rushed to hospital.

On Sunday September 11, I – and around 30 other Victorian women – gathered on Parliament steps in Melbourne to protest one of the most abhorrent consequences of Victoria’s transgender laws: the housing of violent male sex offenders in women’s prisons.

A trans-identified male attacked a woman in broad daylight in the inner-city suburb of Richmond, demanding that she ‘lie down and have sex’ with him. He put his hands down her pants, attempting to remove the woman’s jeans, but she was able to fight him off as passersby came to her aid. When confronted, the perpetrator said, ‘I didn’t do anything, it was her fault.’

I will not use female pronouns for this man.

This male predator is currently housed in the Dame Phyllis Frost Centre – a women’s correctional facility in Deer Park. Understandably, the female inmates are terrified. They have petitioned the Minister for Corrections, the Department of Justice and Community Safety, Corrections Victoria, and the Ombudsman to have the man transferred to a men’s prison, to no avail.

In another example of how dangerous trans and gender-diverse inclusion policies are for women, the inevitable has already happened. A trans-identified male sexually assaulted a woman at Tarrengower women’s prison in Maldon, Victoria. The only mention of this incident in mainstream media was in two paragraphs at the end of an article by The Age and Sydney Morning Herald. The article was largely devoted to championing research produced by La Trobe University in conjunction with Transgender Victoria, which focused on transgender people as suffering ‘intense sexual violence’ in the criminal justice system.

If you feel you’ve just stumbled into a dystopian nightmare, you’re not alone.

Source: Men in women’s prisons is a human rights violation | The Spectator Australia

A transgender rights advocate will finally stand trial next week for murdering a lesbian couple and their 19 year-old son in 2016, after campaigning against a lesbian festival the victims attended.

Rivers is a US Navy Veteran and former award-winning teacher when she (sic) went by the name David Warfield in the 1990s.

Source: Trans activist will finally stand trial for 2016 murder of lesbians and their son next week | Daily Mail Online