Pornography impedes love, intimacy, respect, and connection. Yet many continue to defend it.

Let’s start with the world according to pornographers:

If you do not accept the obvious “logic” of that argument, you are a prude who is sex-negative.

If your concerns about pornography flow from spirituality, you must be a religious nut.

If your concerns about pornography are based in feminism, you must be a man-hater.

I used the term “sexual-exploitation industries” to include prostitution, strip clubs, massage parlors, and escort services, along with pornography and other mediated forms of commercial sex. Applying a feminist analysis, all of these enterprises are ways that men buy and sell objectified female bodies for sexual pleasure. Boys and vulnerable men are also exploited in these industries, but the majority of these businesses offer men the opportunity to buy women and girls.

Some of the ideas are drawn, and updated, from my 2007 book, Getting Off: Pornography and the End of Masculinity, which is available as a free PDF at https://robertwjensen.org/books/getting-off/.

Source: Pornographic distortions: The struggle for intimacy in the 21st Century

The Australian Senate has passed a motion disallowing the federal government from using gender-inclusive language in anything it does.

The motion calls on the federal government to “reject the use of distorted language such as gestational/non-gestational parent, chest-feeding, human milk, lactating parent, menstruators, birthing/non-birthing parent”.

It also says that any material produced, including legislation, websites and employee documentation and training must ignore these terms.

It comes after Australian National University researchers suggested ditching terms such as “mother”, “father” and “breastfeeding” to be more inclusive. 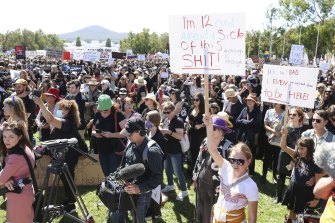 We invited you to tell him your stories through the Herald and The Age. And the deluge began. Hundreds of women from across the country wrote of the traumas suffered, of feelings of shame, humiliation and fear they had endured, many for decades. They had been abused by friends, family, colleagues, strangers; in their homes, at their workplaces, on public transport, in taxis – anywhere and everywhere. Some women told of their experiences from 50, 60 years ago, for the first time. Grandmothers, mothers, daughters wondered what their lives would have been like had they not had to carry their secrets, their traumas, their shame through the years.They are united in their desire to be listened to for altruistic reasons – they want their stories to contribute to the movement towards change that has gripped the country. They are inspired by the bravery and strength of young women like Brittany Higgins, Grace Tame, Chanel Contos and those who responded to her petition, and have told of their experiences to build on the momentum created by younger generations. They are angry because every woman has a story to tell and injustices continue. And they want to be part of what they hope will be historic change in the treatment of women in society – because enough is enough.

Source: Prime Minister Scott Morrison, are you listening? Here are our stories

In our recent research, we argued strict masculinity norms can emerge when men vastly outnumber women. This is due to competition increasing and intensifying among men because there are fewer women to partner with.

This can intensify violence, bullying, and intimidating behaviours that, once entrenched in local culture, continue to manifest themselves long after sex ratios have normalised.

We tested this hypothesis using data the convict colonisation of Australia. In just under 100 years, between 1787 and 1868, Britain transported 132,308 convict men and only 24,960 convict women to Australia. Migrants were also mostly male. So, there were far more men than women in Australia until well into the 20th century.

We used historical census data and combined them with current data on violence, sexual and domestic assault, suicide and bullying in schools. From that, we were able to see the regions with significantly more men than women back in convict times still experience problems today. This is even when we account for the influence of the total number of convicts, geographic characteristics, and present-day characteristics of these regions, including education, religion, urbanisation and income.

Our research also shows assault and sexual assault are much higher today in parts of Australia that were more male in the colonial past. We also find much higher rates of bullying among boys in schools, as reported by parents or teachers.

Source: History repeating: the surprising link between toxic masculinity and Australia’s convict past

The federal government has ruled out key recommendations from a major review into the family courts.

The government has released its response to an Australian Law Reform Commission inquiry into family law.

The government rejected the commission’s call for the establishment of state and territory family courts and child protection laws.

The government acknowledged the recommendation proposed one way to fix the “broken” split court system.

“But the alternative structure it proposes represents radical change to the federal, state and territory court systems and in the best possible scenario, would take years to fully implement, and in the most likely case scenario would not succeed past the early stages,” it said.

The government also rejected a proposal to repeal laws requiring the courts to consider allowing children to spend significant time with each parent.

In its response, the government agreed wholly, in principle or in part with 35 recommendations.

It noted six recommendations and disagreed with six.

A Canadian man was arrested this week after violating a court order that banned him from speaking publicly about his son’s gender transition.

The high court ordered the dad to not stand in the way of the 15-year-old’s hormone therapy and to try and better understand gender dysphoria, the outlet reported. He was also told to stop speaking to the media about the case and warned that his public attempts to undermine his child’s wishes was a form of family violence, according to the article.

“They’ve created a delusion, and they’re forcing parents to live in this delusion,” the father previously said, according to The Post Millennial.

“What happens when the bubble explodes and the delusion ends? … She can never go back to being a girl in the healthy body she should have had … These kids don’t understand. What kind of 13-year-old is thinking about having a family and kids?”

We document gender and socioeconomic inequalities in personality over the life cycle (age 18–75), using the Big Five 2 (BFI-2) inventory linked to administrative data on a large Danish population. We estimate life-cycle profiles non-parametrically and adjust for cohort and sample-selection effects. We find that: (1) Women of all ages score more highly than men on all personality traits, including three that are positively associated with wages; (2) High-education groups score more favorably on Openness to Experience, Extraversion, Agreeableness, and Neuroticism than low-education groups, while there is no socioeconomic inequality by Conscientiousness; (3) Over the life cycle, gender and socioeconomic gaps remain constant, with two exceptions: the gender and SES gaps in Openness to Experience widen, while gender differences in Neuroticism, a trait associated with worse outcomes, diminish with age. We discuss the implications of these findings in the context of gender wage gaps, household production models, and optimal taxation.

Source: Inequality in personality over the life cycle – ScienceDirect